In 1999 I was in the London apartment of a friend who was studying at The Laban Centre. I picked a book about Laban off her shelf, opened it and landed on an image of a “vector box” with 26 points marking directions outward from the body and one marking center. I was seeking a new method for making movement because I was about to go into the studio with dancers to make a new work. I knew that our schedule was very tight and I needed a way to work that didn’t rely on studio time together. While looking at this vector image I correlated the 26 points to the 26 letters in the alphabet. I devised a system called Estrella that I used in the next several works I made. I would write out sentences that were relative to the ideas I was working with. For example, “Transformation is happening.” The written score would be filled in with the corresponding where, limb, level, type, and, other body part (OBP), and the score would be translated by the dancers. The most interesting part for me was the interpretation that would happen in the individual dancer reading the score. I would give the same score to three different dancers and it would result in what I called “almost unison”. Some things would be the same or similar but the transitions and specifics would be different enough to make it interesting as a group dance. Of course, what I didn’t know in 1999, was that Trisha Brown had made a similar system that she called Locus. Well, good ideas are good ideas. We did similar but different things with it. I kept evolving the system for the next several years. I eventually added video-like qualities. I hadn’t worked with this system since 2002, but have re-regarded it in 2021. 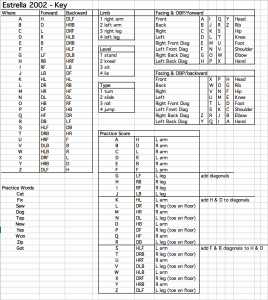 The Estrella Improvisation Methods can be played in two ways. The first is to memorize the points on the Vector Box so that you can move freely from point to point. The second is to memorize the Forward Alphabet associated with the Vector Box from the Key so that you can improvise on words that can be called out to you. The Vector Box Orientation, its relationship to your body, can change in three ways. First it can remain in relationship to your body where H is always above your head and F is always at midline to the front of you, etc no matter what shape you find yourself in or where you are facing in the room. The second is that the Vector Box can remain “standing” while you change your level within it but still allowing your “front” to change according to the front of your body. The third way is to orient and expand the Vector Box according to the room you are in, deciding where front is and always keeping that relationship no matter where you face, so F will always be toward the “front” of the room even if you are facing back. Estrella Improvisation Methods allow for play on the Vector Points, becoming more comfortable with them as well as exploring all possibilities of moving between them. Begin this play by getting comfortable with the sensation of the star of points surrounding you as you move in space. Freely choose Limb, Other Body Part (OBP) and Motivation as you play.

Inlining: Passing the limb through the center (intersecting with or passing through the body) for another limb to take over to move to the next vector point, taking a shortcut. Related to Pointing. Pointing: Reaching to a vector point with a flexion/extension of a limb. The return or recoil can be executed freely.

Outlining: Moving between the vector points maintaining the length of the limb while tracing the “outside” extremes of the vector box, taking the long way. Related to Brushing. Brushing: Reaching to a vector point with a brush like movement of a limb. The return or recoil can be executed freely.

Indicating: Move through the vector points without moving your limbs (internal motivation) and let your limbs respond to those indications.

Opposition: Indicating the opposite vector point with another limb while moving to the dominant vector point.

Opposition Go: Travel in the opposite direction as the dominant vector point.

Alternation: Indicating any vector point that is NOT the opposite (or the continuation) with another limb while moving to the dominant vector point.

Alternation Go: Travel in any direction that is NOT the opposite (or the continuation) of the dominant vector point.

Long Way Round/Shortcut: Move to the next vector point by choosing the shortest distance or the longest distance between the points but maintaining the most direct path.

Pass Through: Pass your center, full body or part of your body through the vector points while moving, not as specific about which limb or OBP is connecting with a particular vector point.

Condensing: Shrink the Vector Box to fit onto your body then move your limbs along the surface of or near to your body.

Gravity Down: Let the movement to any vector point (dominant, opposite or alternate) complete on or take you to the floor. If you are already on the floor and your next direction is a D point, then move along the floor to it.

Traveling: Moving along a specific path in space as you explore the vector points and motivations.

Limiting: Limit what body parts you move, choose one or two body parts to move with only.

Patterning: Identify a pattern in your movement and stay with it, explore it.

Styling: Layer your movement with a style or quality like floppy or stiff or bouncy or heavy, etc.

Halving: Reorienting half your Vector Box according to where your torso is and half to where your legs are. Move in two planes at once.

Manipulating: One partner moves the other through the Vector Points. The person being moved maintains their last instruction until moved to the next.

Dueling: One partner moves through the Vector Points while the other stays in relationship to them, avoiding their movements and staying in their negative space.

Simultaneity: Two or more people interpret their scores or freely improvise while staying connected or near-by to each other.

Ghosting: One person moves while the other ghosts through their material after them.

Capturing: One person moves while the other captures a segment and repeats it, captures another segment and adds it to their first etc, building a whole new phrase from the captured moments.

Facilitating: One person moves through the vector points with the help of another or others, using lifts and supports to reach the high points.

Undo = go back to end shape of previous move

Loop = repeat specified segment of material without transition, pop to beginning of segment

Scale Change = change the scale of the specified material, make it bigger of smaller

Re-Frame = take one part of the movement and “zoom” in or out on it, make it the new focus

Time shift = change the time of a specified segment of material, slower or faster